get to know the incredible Orangutan and where to see them

Native to Malaysia and Indonesia, orangutans are incredible creatures. If they seem similar to humans, that’s because they are! In fact, the term “orangutan” in Malay and Bahasa Indonesia translates to “person of the forest” with orang meaning “person” and “hutan” meaning forest.

It’s not only their name that connects them to humans, however. The great apes boast 96.4% of the same genes we humans have, making them one of the closest animal relatives to humans.

They’re extremely intelligent creatures that reason and think, and even express emotions like joy, fear, anger and surprise. Infant orangutans cry when they’re hungry, whimper when they’re hurt and smile at their mothers.

Though large, orangutans are usually quite gentle, living their lives quietly up in the trees hidden away from predators and only descending to the forest floor when they must. Female orangutans and their young may gather in one area if there is an abundant food source but they do not live together in social groups and typically claim their own territories covering several kilometres.

Why are orangutans going extinct?

All three orangutan species are classified as Critically Endangered according to the International Union for the Conservation of Nature and Natural Resources (IUCN) meaning they are close to becoming extinct in the wild.

The number one threat to orangutans is deforestation – often due to palm oil operations and other agricultural endeavours. As the orangutans’ natural habitat disappears, their food sources become more limited, which makes it harder to find food and forces them into areas with humans where they’re more likely to be caught or killed. Unfortunately, young orangutans are still captured to sell as pets. When they’re captured, the mother will often be killed, further reducing the species’ chance to reproduce.

That said, there are many organisations and efforts working to conserve these precious primates and their natural habitats.

Where can you still see orangutans in the wild?

Orangutans used to roam from southern China to Java. Today they’re only found on two islands – Sumatra in Indonesia and Borneo, which is shared by the Malaysian states of Sabah and Sarawak, along with Indonesian Kalimantan and Brunei.

These areas, especially Borneo, are home to a number of orangutan sanctuaries, wildlife reserves and conservation centres that offer ethical ways to learn more about these incredible creatures while also helping support their conservation or rehabilitation. (These islands are home to many other threatened species as well, such as the Sumatran tiger, clouded leopard and Asian elephant.)

In Malaysian Borneo, these parks offer the best opportunities to catch a glimpse of the man of the forest:

Find out more about these parks and how to visit them HERE! 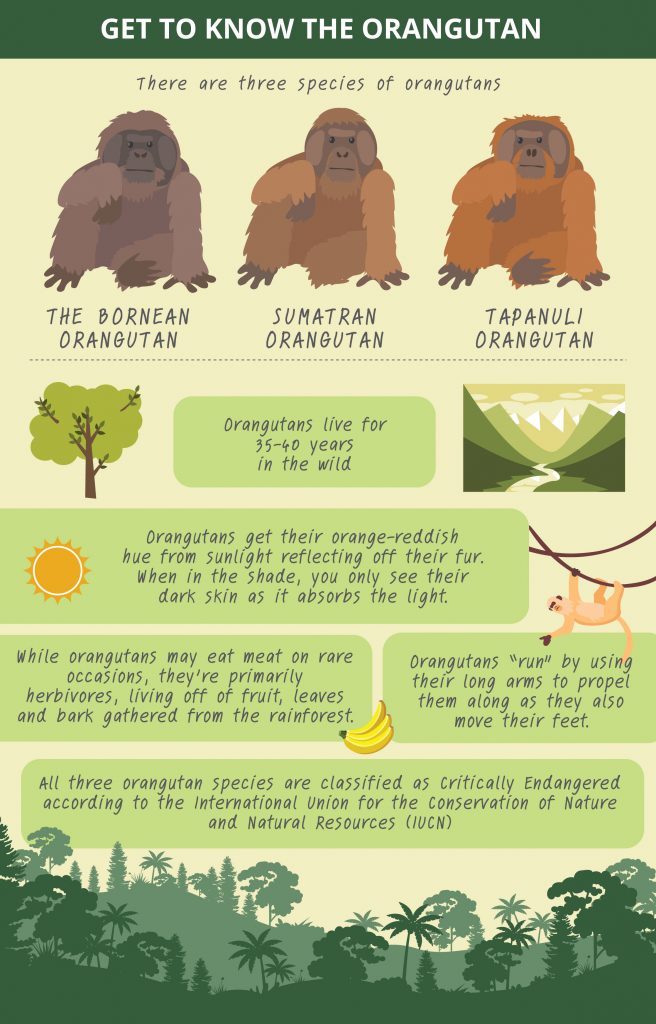