Departure Levy When Travelling Out of Malaysia

We have received more details from one the airlines on the soon to be introduced Malaysia departure levy and we are pleased to share these updates with you.

The departure levy will be collected at Point of Sales and will be applicable on all tickets issued on or after 1st September 2019.

Below table summary is prepared for easy reference. 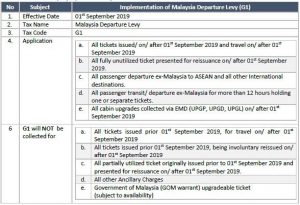 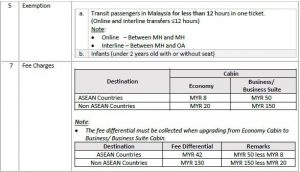 The Malaysian Government has announced that from 1 September 2019, anyone who flies out from Malaysia will have to pay tax in the form of a departure levy.

Travellers flying from Malaysia to ASEAN countries will have to pay RM8 as an economy class passenger or RM50 when flying in other classes. ASEAN countries are Brunei, Cambodia, Indonesia, Laos, Myanmar, the Philippines, Singapore, Thailand and Vietnam.

Those flying out from Malaysia to other countries outside of the ASEAN region will be charged a departure levy of RM20 if they are flying economy, and RM150 if their seats are not in economy class.

The departure levy will not be imposed on infants and toddlers under 24 months. Also exempted from paying the departure levy are aircraft passengers transiting via Malaysia, namely if they arrive in Malaysia from abroad and fly from Malaysia to the next destination within 12 hours.

We have no information about how the departure levy will be collected at the moment but we will advise once we have further news.

Kindly inform your guests who are travelling to Malaysia. For more information, please contact inbound@my.diethelmtravel.com.