tour the story of the Ramakien at Bangkok’s Grand Palace

The outer walls surrounding Wat Phra Kaew (the Temple of the Emerald Buddha) at Bangkok’s Grand Palace aren’t simply for decoration. A total of 178 wall panels are painted with murals depicting scenes from the Ramakien, the Thai version of the Indian epic, Ramayana. Stretching out over long corridors with bright red ceilings, the paintings create a continuous narrative without any clear break between the scenes.

The Ramakien is a fascinating tale about good triumphing over evil following the battle between King Rama and Tosakanth, the King of the Demons. Tosakanth falls in love with King Rama’s queen, named Sida. He kidnaps her and takes her to his palace in Krung Longka in hopes that she will fall in love with him. Naturally, a magnificent battles ensues as King Rama tries to save his queen. Although Tosakanth has a powerful demon army and evil magic spells at his disposal, King Rama has Hanuman (the god-king of the apes) who leads an army of both monkey and human warriors, helping King Rama defeat Tosakanth and win back Sida.

If you’re unfamiliar with the story however, the murals can be a bit overwhelming and bring up questions, which is why it’s always a smart idea to visit the Grand Palace with a guide.

We asked one of our most popular Thai guides, Khun Anu, what some of his secrets that he shares with guests are when visiting the Grand Palace. Here’s what he had to say… 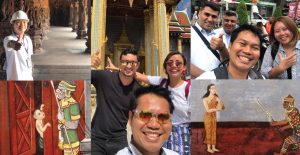 “When I take guests to tour the Grand Palace, one of the main attractions we spend time at is the world’s longest mural at the gallery near Wat Phra Kaew. While the story is a classic, visitors can tend to start getting bored because there is so much to look at…so I have a little technique to keep things interesting! Each corner of the 178 scenes holds a small, funny or cultural secret left by the original painter and restorers that adds a dose of humour to the story.

These unexpected images are hidden within the main storyline. While the focus of the painting is usually at eye-level, artists have added scenes of daily life and even silly surprises either below or above the action.

Scroll down to see some of the incredible scenes…as well as some of my favourite surprises!”

In the murals, King Rama’s palace is a drawn using the Grand Palace’s structure and design. 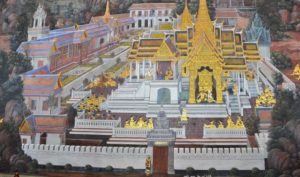 Here Tosakanth is trying to make Queen Sida fall in love with him after he has kidnapped her and taken her to his palace. 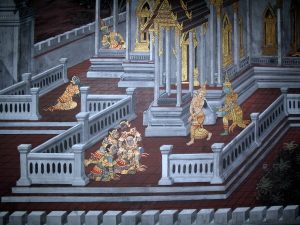 Here we have a soldier who is leaving to go to battle…but not before running back to grab a traditional Thai snack made by his wife at home! 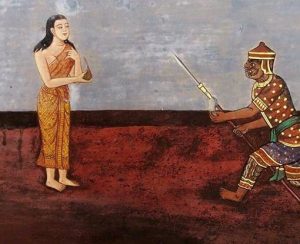 Here a demon warrior walked past a man selling sweets and just had to stop to buy one before heading to battle. 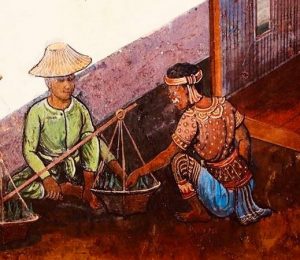 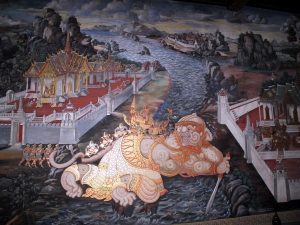 Thai people paying respects to a spirit house and asking the house’s inhabitants to protect their son who is heading to war. 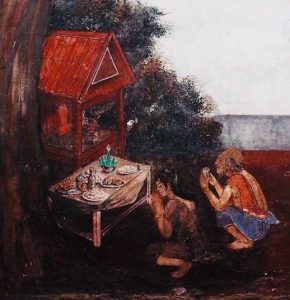 A small boy sticks out his tongue at a palace security guard. 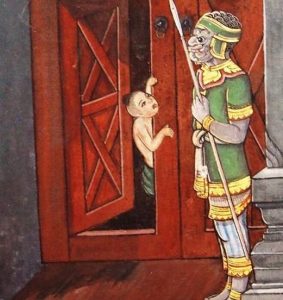 Here a demon warrior was taking a nap during his shift 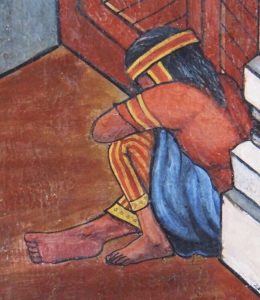